Men At Risk™ has compiled the following information on job mortality rates. 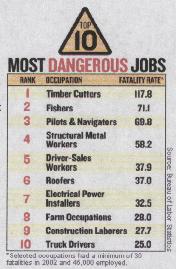 The top ten most dangerous jobs in America/Fatality Rates*

1. Timber Cutters – 117.8
On December 3, 2002, a section of a felled tree struck and killed an 18-year-old logger. He was one of the last of 104 lumbermen to die in 2002, when timber cutters led the nation with the highest on-the-job mortality rate of any vocation.

The mortality rate among lumbermen, 118 timber cutters per 100,000 workers, heads the list of the top 10 most dangerous jobs in America for 2002 put out by the Bureau of Labor Statistics, and was more than 26 times that of the average U.S. worker.

The fishing industry ran second with 71 fatalities per 100,000 workers, with drowning the most common cause of death.

The crab fishery in Alaska is particularly perilous, according to University of Alaska economist Gunnar Knapp. “The environment in which the crabbing is done, in the Bering Sea, in winter, has to be some of the worst conditions on Earth. You’re hundreds of miles from port, in stormy seas, with ice forming all over, sometimes so thick it capsizes the boat.”

Furthermore, the crab crews are in a mad dash to fill their holds. “The season lasts only three or four weeks,” says Knapp, “they fish as hard as they can before the season ends, often working 40 out of every 50 hours. It’s an intense, fundamentally dangerous environment with a lot of money at stake.”

Another often owner-operated job — commercial pilot — comes in third on the list of the country’s most dangerous jobs, with 70 fatalities per 100,000 workers.

Most pilot fatalities come from general aviation; bush pilots, air-taxi pilots, and crop-dusters die at a far higher rate than airline pilots. Again, Alaskan workers skew the profession’s data; recent National Institute for Occupational Health and Safety (NIOSH) stats indicate that they have a fatality rate four times higher than those in the lower 48. “Alaskan pilots have a one in eight chance of dying during a 30-year career,” says George Conway of NIOSH. “That’s huge.”

Conway reports that the most common scenario in fatal plane crashes in Alaska is, “controlled flight into terrain.” A pilot starts out in good weather then runs into clouds, loses visibility, and flies into a mountainside.

Even though pilots flying small planes have a much higher fatality rate than pilots flying big airline jets, they’re not financially compensated for the added danger; non-jet pilots average about $52,000 a year in pay while jetliner pilots make about $92,000.

Other highly dangerous jobs, including construction trades, pay high wages. Fourth on the fatality list, structural metal workers, the steel workers who build our skyscrapers and bridges, died at the rate of 58 per 100,000 in 2002, and earned an average of about $20 per hour. Sixth were roofers (37 per 100,000 and $16 per hour), and seventh were electrical power installers (32 per 100,000 and $21 per hour).

One top-10 surprise was the fifth place finisher — driver-sales workers, which, according to a BLS spokesperson, includes pizza delivers, vending machine fillers, and the like. Again, these workers are often self employed. Traffic accidents contributed heavily to their high fatality rate of 38 per 100,000, but they also suffered from crime; nearly a quarter of their deaths came from robberies and assaults.

Farm workers come in eighth on the BLS list with 28 fatalities per 100,000. According to the Department of Agriculture farmhands earned roughly $8.50 an hour in 2002.

In terms of sheer numbers, more truck drivers — 808 ––died on the job than any other vocation in the top ten. But because there are so many truckers, their fatality rate is only 25 per 100,000, giving them tenth place on the list. Truckers die, mostly in traffic accidents, at six times the average rate but less than a quarter the rate of timber cutters.

Like the crabbers, truckers are often under intense time pressure; the faster they move their goods around the country the more money they make. The often self-employed truckers face cut-throat competition and battle big overheads paying off expensive rigs. Exhausted truckers sometimes push themselves past their breaking point to squeeze extra dollars out of their work-week, becoming a danger to others, and, as the numbers suggest, to themselves.

Note: Selected occupations had a minimum of 30 fatalities in 2002 and 45,000 employed in the category.